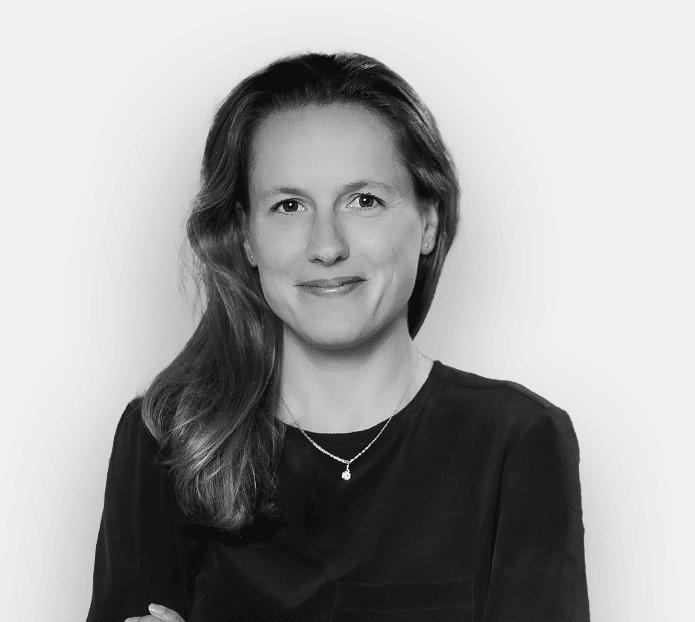 Those of you who follow the latest with climate are probably familiar with the “My Climate Journey” podcast (those who are not – fascinating content at a click of a button). Like many other climate enthusiasts, I also have my own climate journey. It started early on as an instructor in a traveling youth movement, through my Masters’ degree in ‘Environmental Change and Management’ at Oxford.  Today I get to continue that journey at Vintage, where I am leading Climate investments.

While at Vintage, I have grown to know hundreds of VC funds and thousands of companies across multiple sectors, stages, and geos. This has led me to believe that we are experiencing a new climate wave – one that will change the way we live and holds a massive business opportunity.

This publication is based on a presentation I recently gave at Vintage about the climate opportunity. It covers the latest on climate, explains why it is the largest problem humanity has ever dealt with and therefore a huge opportunity, and demonstrates how it differs from cleantech 1.0 (perhaps the most important part). It is based on dozens of papers and interviews with leading climate investors including Union Square Ventures, Transition, At One, Voyager, Mayfield, Third Sphere, Climactic, Overture, Planeteer, Extantia, TO VC, and others. I would like to thank all. In addition, a special thank you to the Planetech team.

As seen in the slide below, during the past 3 years, important developments have been taking place across key dimensions at an accelerating pace through extreme weather events, corporates, governments, investors, and success stories. 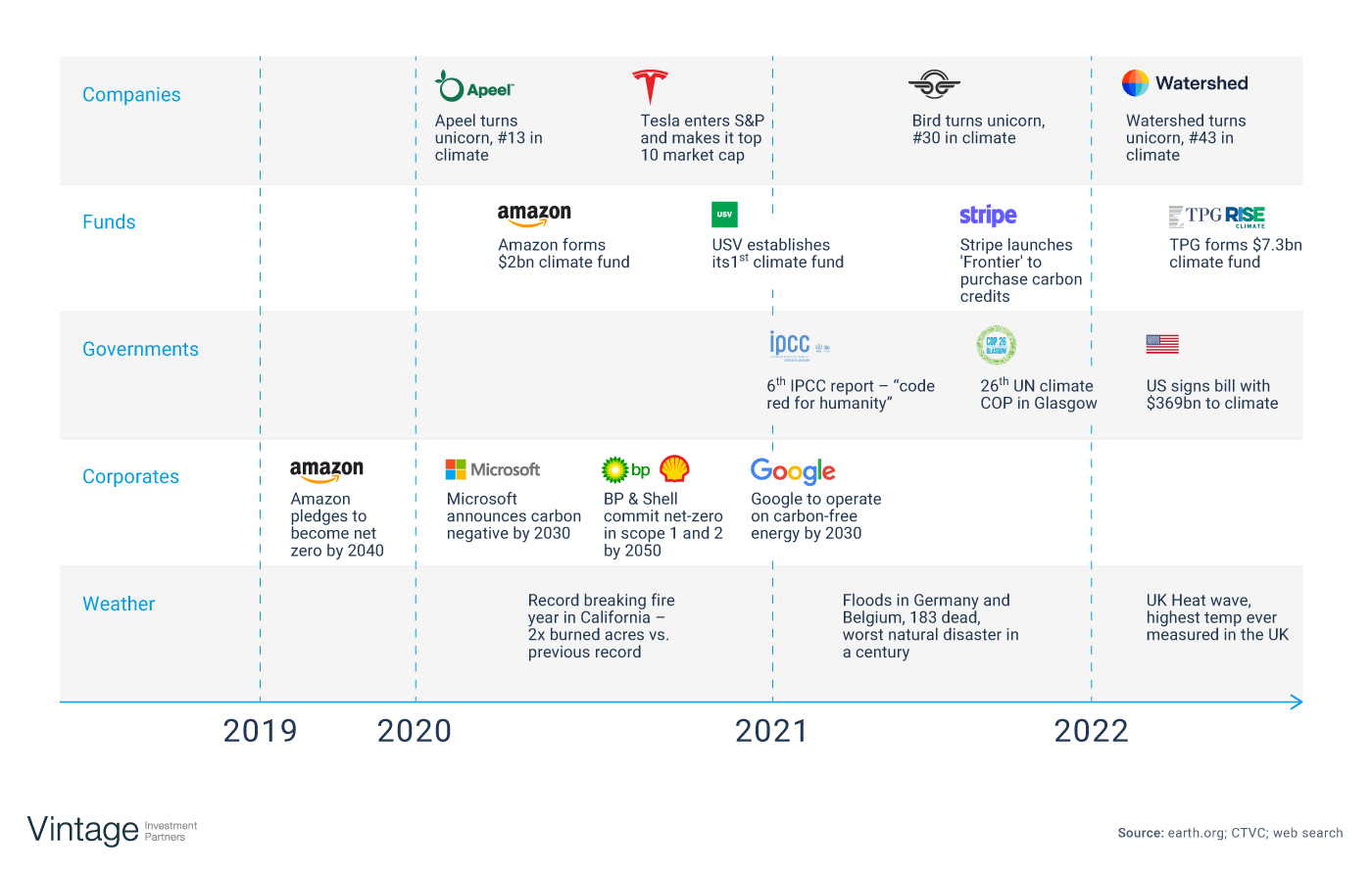 Now let us take a few steps back and explain the fundamentals behind the buzz.

Climate change is the largest problem humanity has ever faced

Bluntly borrowing from Chris Sacca – “we are fu**ing the planet”. Our impact on earth has become so significant that we have pushed it from the Holocene (the previous geological era) to the Anthropocene (i.e., “Age of Humans”), a new geological epoch dominated by our own activity. We are messing up bad for “Earth” and for us. There are multiple examples to be mentioned but here are a few from a 2021 BCG paper: earth temperature has risen by 1.1 °C vs. pre-industrial levels, there has been a 68% decline in population sizes since 1970, 8 million people are displaced by flooding each year, and 11 million metric tons of plastic flow into the ocean every year.

In a fundamental paper published in 2009, scientists noted nine planetary boundaries beyond the limit of our Earth Systems. You can see them here: 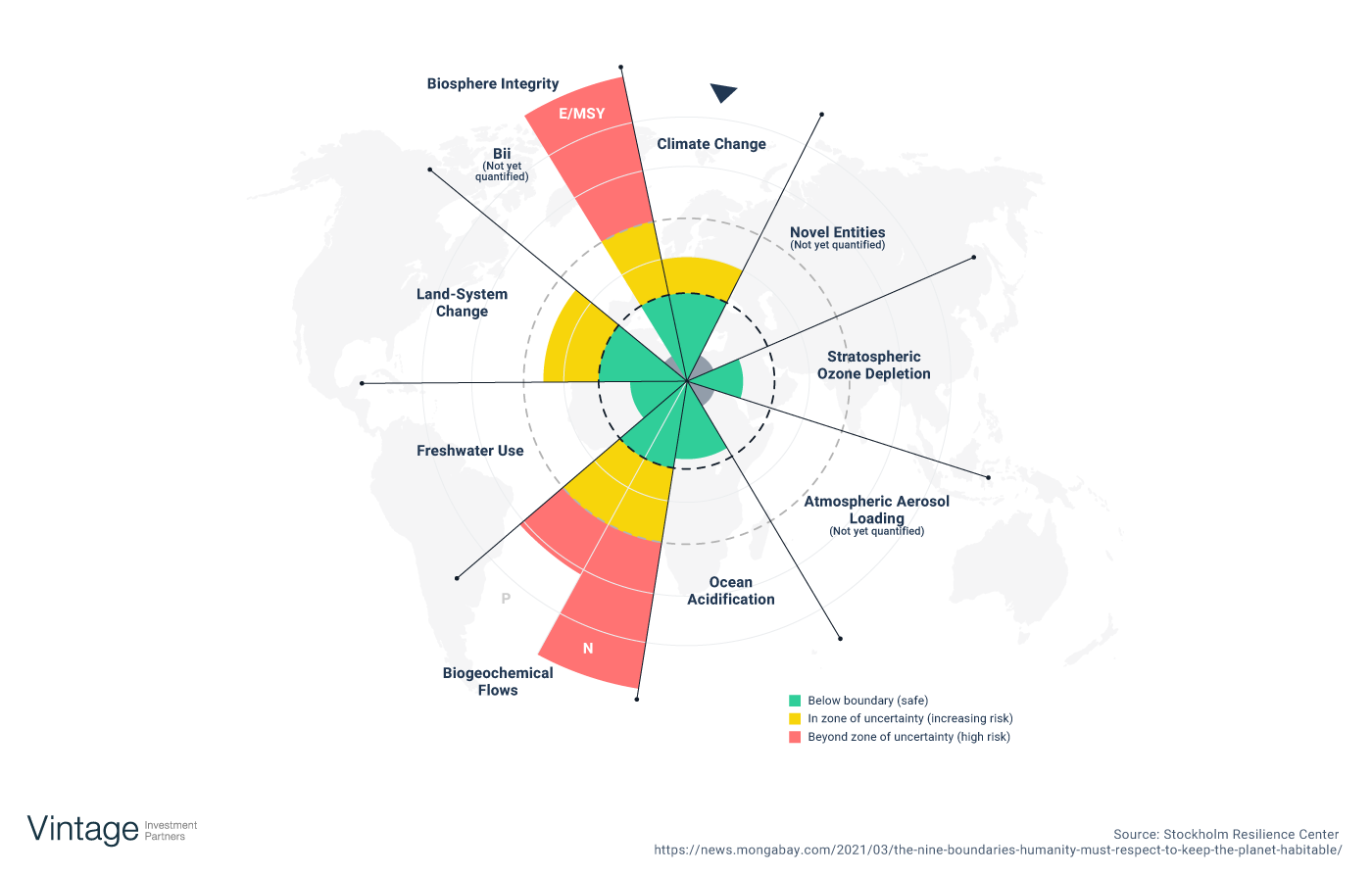 Together, these nine boundaries form a vast web of interrelated processes — if one is unbalanced, the stability of the others is impacted. Today, we are outside of the safe zone in four boundaries: Climate Change, Biodiversity, Land Systems Change, and Biogeochemical flows (i.e., nitrogen and phosphorus).

Climate change, also known as ‘global warming’, is the most famous of the nine and presumably, the most pressing. Over the past two centuries, we have dramatically increased greenhouse gas (GHG) concentrations (primarily due to fossil fuel burning) and pushed ourselves to the red zone. GHGs (e.g., Co2, Methane) collect in the atmosphere and absorb sunlight and solar radiation that have bounced off the earth’s surface. Normally, this radiation would escape into space, but these pollutants trap the heat and cause the long-term heating of our climate system.

It is unequivocal that human influence has warmed the atmosphere, ocean, and land. And if you are thinking “maybe a few degrees are not that bad”, here is a fact: During the last ice-age, global temperatures were ~6 °C lower than today.

The graph below shows the annual increase in GHG emissions up to 51 gigatons of Co2 equivalent in 2021, and four potential trajectories by 2050. Simply put, we need to cut 50% of emissions by 2030 and eliminate them by 2050 to stop global warming. 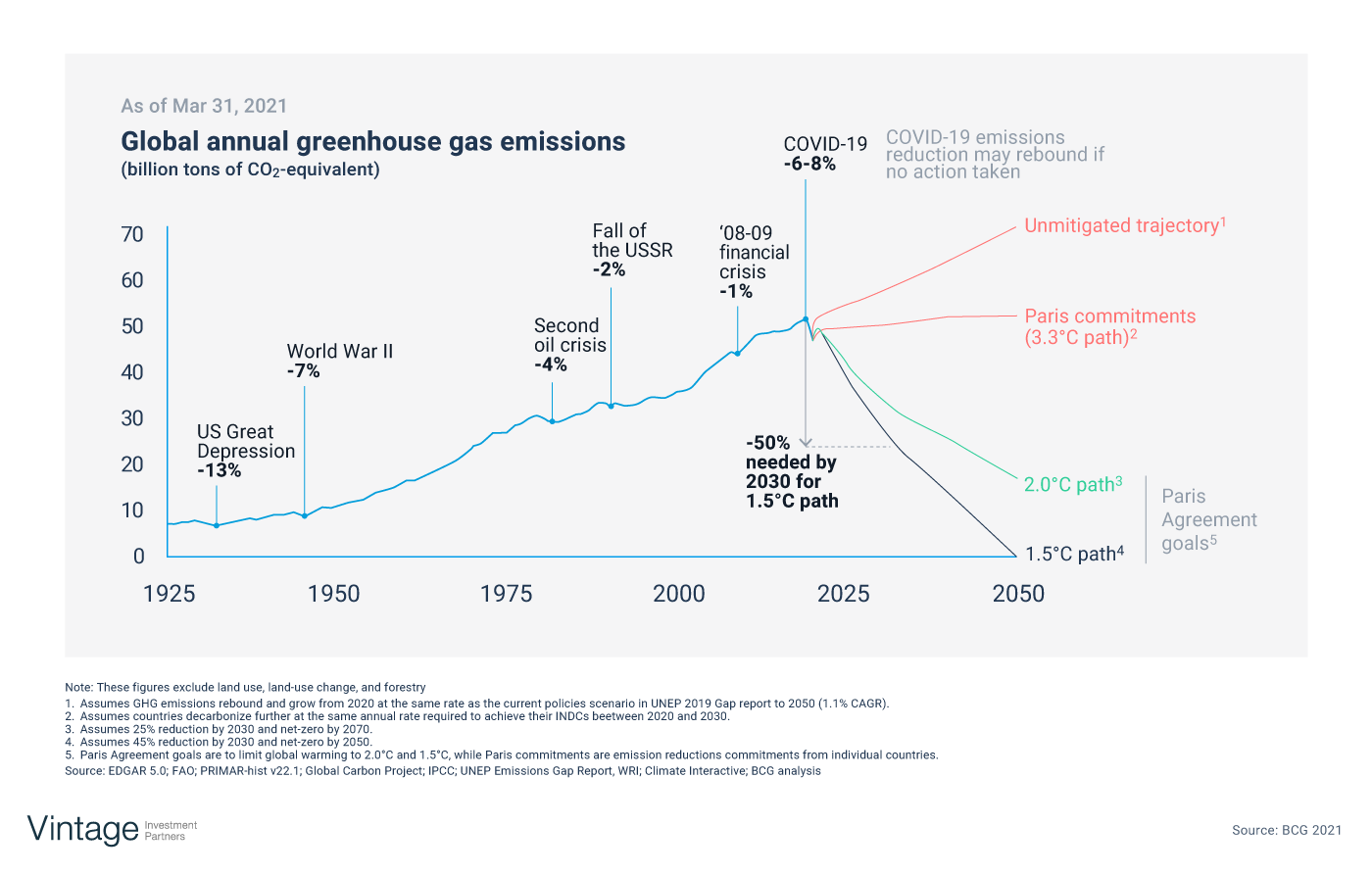 Climate is a massive business opportunity

As the world emits more carbon, the warming effect gets stronger. Thus, we must bring GHG emissions down to zero. Bill Gates, in his book, “How To Avoid A Climate Disaster”, says this effort is going to be hard, but doable. The first step is to understand where emissions come from, and then what it will take to bring them down to zero. According to Gates, and as depicted below, 31% of emissions are generated while we make things like cement, steel, and plastics; 27% when we produce electricity, 19% for food and ag produce, 16% from transportation (a bit counter-intuitive) and 7% for heating and cooling. 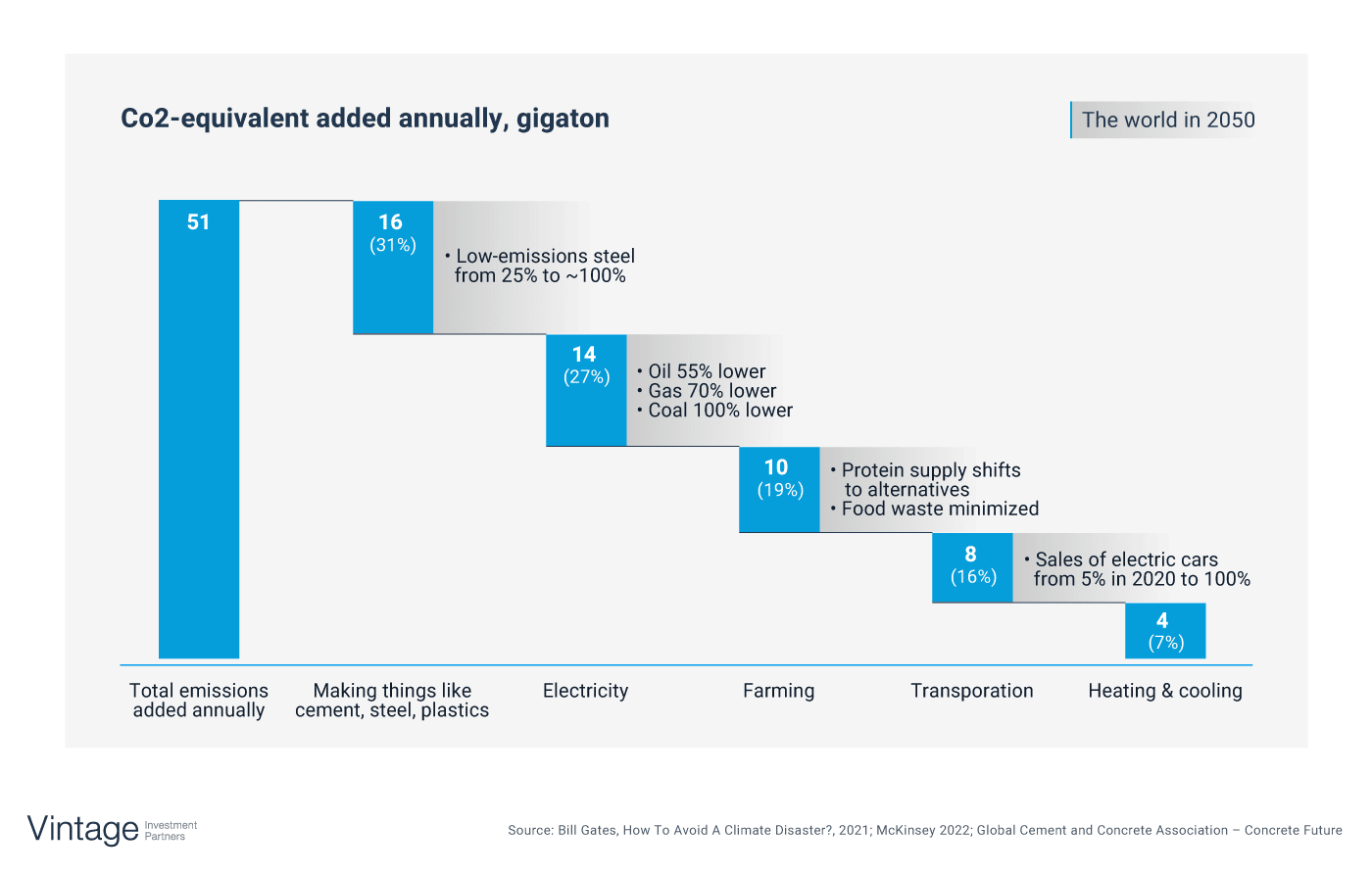 Note: getting down to zero does not necessarily mean we would not emit any GHGs, rather we will offset our emissions using natural based means (e.g., trees, ag soil management) and increasingly man-made solutions (e.g., direct air capture, ocean-based removal, bioenergy with carbon capture).

The change needed across the five pillars is not just about implementing point solutions, it is a systemic retooling of our global economy. According to McKinsey, by 2050, 100% of global steel will be produced with 0 emissions, coal will be eliminated, oil will be slashed by more than 50%, protein supply will increasingly come from fermentation or cultivation technologies, and all new cars will be electric.

The good news is that companies providing little-to-zero compromise sustainable solutions are enjoying an uncapped upside. Tesla, a famous example, provides a solution for Transportation (as a reminder, 16% of global emissions). It targets only personal cars (responsible for 6% of global emissions), and today has only 1% market share. That is enough to become one of the world’s most valuable companies. Now imagine how many more Teslas will emerge during the next couple of decades across industries. Backing those companies are the opportunities we are after.

Why is it different this time?

The most important part of today’s climate theory is that this period is different from cleantech 1.0. In fact, we believe at Vintage there are nine aspects in which the world has made dramatic progress since. We also think that cleantech 1.0 should be seen as an enabler rather than a reason to shy away from climate investing. 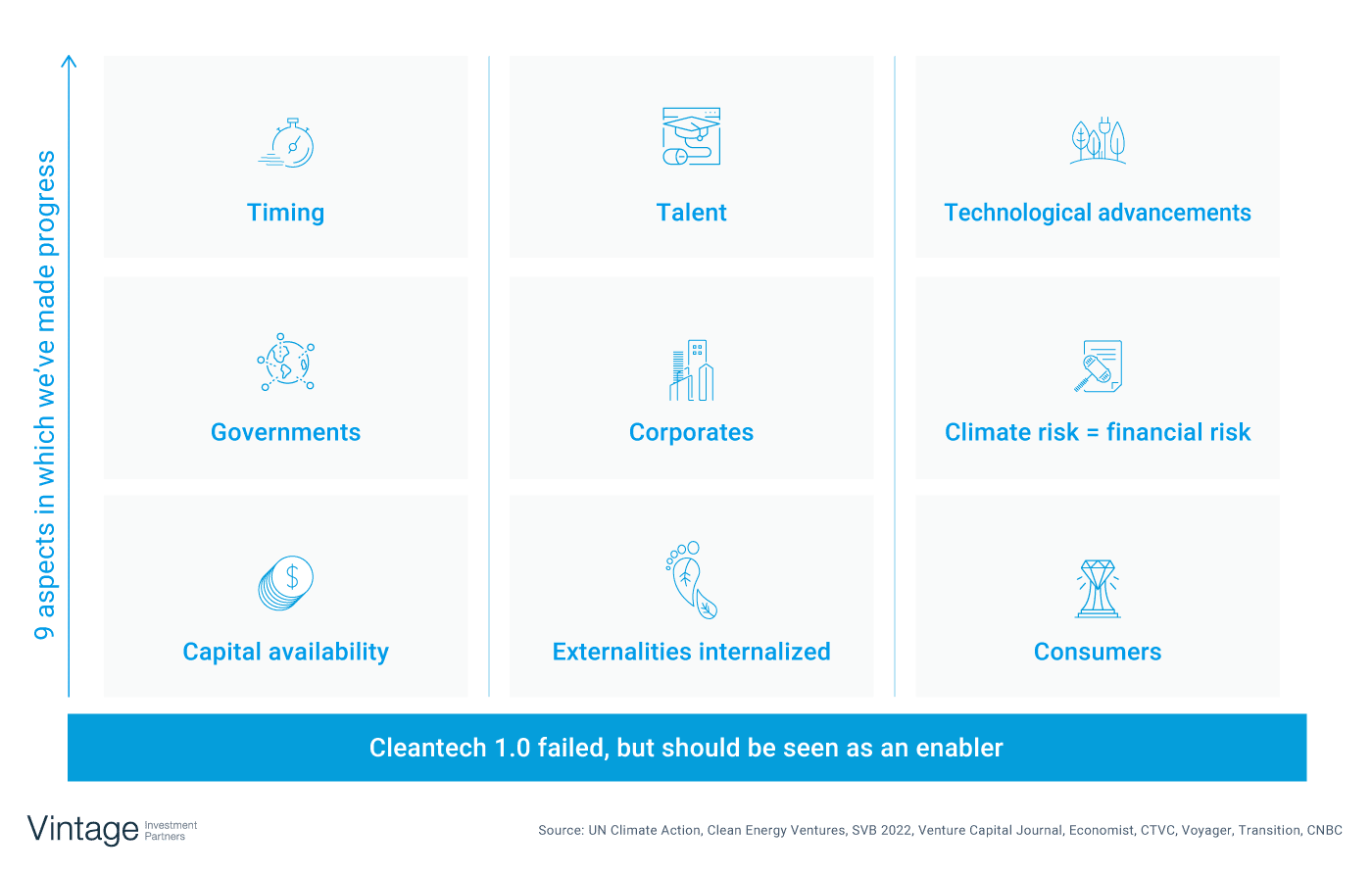 Cleantech 1.0 was mostly wind and solar infrastructure projects, and it failed due to falling energy prices, strong overseas competition and investors applying the “internet” investment formula. Investors lost tons of money, while society earned two things: (1) significant technological advancements have led to 90% reduction in the cost of wind and solar, and (2) lessons learned. Furthermore, throughout history, multiple successful revolutions occurred after a wave filled with failures.

The first thing different this time around is timing. We are 2 decades deeper into the crisis; the impact of climate change is personal and accelerating and it is defiantly a man-made crisis. Younger generations know they will suffer the consequences and scientists say the current decade is money-time.

Talent is looking to solve climate problems. Successful, repeat founders and engineers are moving from general tech to climate at an unprecedented rate, including a second wave of management teams in cleantech who learned from the last time, and top universities such as Stanford and Cambridge have launched sustainability programs.

Technological advancements that did not exist a decade ago open a new array of solutions. Most importantly, falling prices of wind and solar enable a full transition of our energy resources to net-zero. This is key since a lot of the solutions we need require energy. If Tesla cars, for example, are charged with fossil-fuel based electricity, we have not made much progress. In addition, there have been breakthroughs in computing, sensing, materials, and biotech that will help us solve challenges as hydrogen, green cement, cow methane emissions, grid management, and more.

Governments are in. Climate change is a classic ‘tragedy of the commons’ situation, so it only makes sense for governments to act if they are not alone. The Paris agreement in 2015 was a pivotal moment because a multinational agreement to combat climate change was signed by 191 countries. Six years later, at the COP 26 in Glasgow, 70 countries set commitments in place. Those are increasingly being translated into policy interventions, legislative measures, and budgets. COP27, to be held in Sharem El-Sheikh in November 2022, has a #1 target of shifting from pledging to implementation at scale and on time, based on the agreed workstreams in Paris and Glasgow.

Corporates are also in the game. Why? Because they understand that 10 years from now the world will be different in terms of regulation, consumer demand, and of course weather events that might impact supply chains and physical assets. Private players must adhere to new regulations such as carbon accounting, mitigate risks and capture opportunities. Check out this wonderful video by Microsoft, explaining the math behind its decision to become carbon negative by 2030.

Climate risk has become a financial risk. The two worlds have now overlapped, and climate is no longer a nice-thing-to-do. A notable example is insurance companies’ interest in monitoring, measuring, and reducing risks of catastrophic climate-related events, and are likely to adjust premiums accordingly. Another example is the large practices established by McKinsey and alike to support their clients with understanding their climate risk exposure and mitigating it.

Capital is available throughout the stack. In contrast to a few years ago, today’s founders have multiple ways of funding their venture from pre-seed to IPO. Dozens of new early-stage climate focused funds were established recently, and follow-on funding is increasingly available through CVCs, governments, debt, project finance and generalist funds. Finally, top-down ‘sustainable’ capital is looking to be deployed into climate.

Externalities are being internalized. Externalities are a side effect of a commercial activity that affects other parties without this being reflected in the cost. In our case, corporates that emit GHGs place a burden on the environment which is borne by everyone in the form of a changing climate, yet do not incur a cost for doing so. There are two ways to internalize those externalities, one is carbon taxes that have been introduced in 69 countries to date, and the second is by creating a cap-and-trade system and a new market is formed to trade credits. While carbon markets are young, poorly regulated and volatile, they are quick to develop and hold a big promise.

Finally, consumers’ demand is changing, and some early adopters are willing to pay a premium for green products. This is already evident in electric cars, plant-based dairy or meat products, travel emissions offsetting, and sustainable packaging. With time, as technology matures and cost curves go down, consumers will have the possibility to purchase solutions that are better and cheaper.

There are additional challenges in the intersection of VC and climate, such as long R&D cycles, selling to governments, and dependency on regulation/utilities, all very relevant for today. We think these are the challenges that excellent founders and investors will wisely overcome. We will share more about our criteria in climate fund investments in our next post. Furthermore, we are going to be releasing content on multiple climate-related topics, including how to choose a climate fund, climate tech across geos, sub-sectors deep-dive and more.

Climate-tech / cleantech 2.0 is evolving because we have no other choice. There are some wonderful innovations and investments taking place right now. Challenges exist and many companies will fail, but enduring companies will be created and will strengthen our planet and economy while also inspiring more innovation in a much-needed disruption. Supporting founders and companies that want to change the world is our mission and I am beyond excited for my personal climate journey to continue through our work at Vintage. 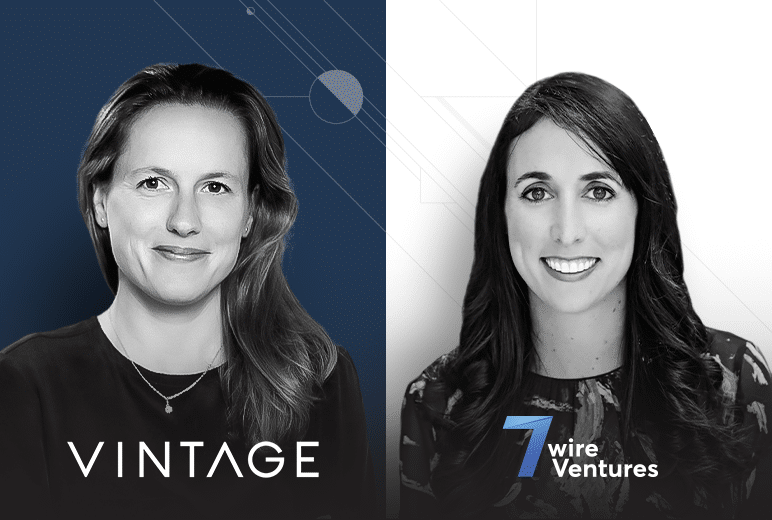 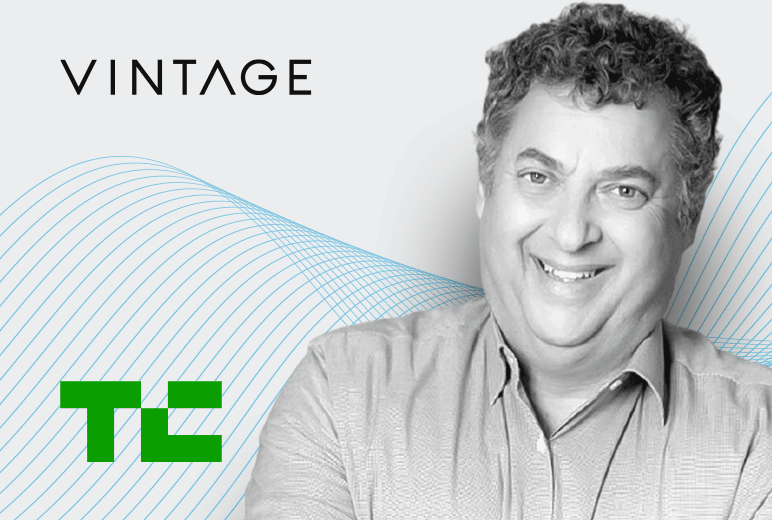 ‘Me Too’ Investing is Eating Returns (TechCrunch)